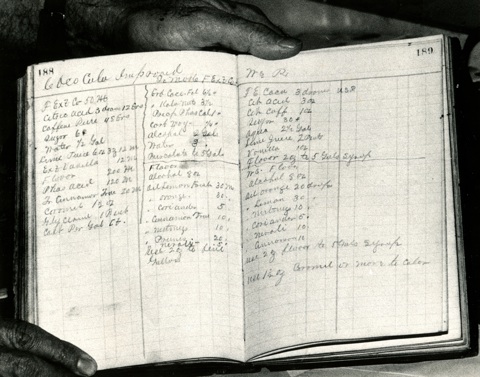 The ingredients of the drink, created by John Pemberton, a medicinal pharmacist in 1886, have always been a mystery.

However, Thisamericanlife.org claims to have discovered a list in a photograph in a newspaper article giving the ingredients and exact quantities to make the drink.

The Feb 8 1979 edition of the Atlanta Journal-Constitution has a photo of someone holding open a book with a recipe claimed to be an exact replica of Pemberton’s.

The recipe reportedly contains the exact measures of all the different oils needed for Coca Cola’s secret ingredient, Merchandise 7X.

Despite making up only one per cent of the drink’s total formula, Merchandise 7X is thought to give the popular soft drink its unique taste.

The official recipe is said to be guarded 24-hours a day in a vault in Atlanta, Georgia.

Note: All of these ingredients can be bought online. In a day or two we’ll post full instructions.

For 125 years, Coke’s secret recipe has remained one of the most heavily guarded trade secrets in the world. Now a group of accidental soda sleuths say they’ve stumbled across a list of its ingredients.

Producers of the radio program This American Life came across an article on the history of Coca-Cola in an old copy of the Atlanta Journal-Constitution, Coca-Cola’s hometown newspaper. Published on page 2B on February 18, 1979, the article received little attention at the time. But, producers say, that’s because no one realized the photo used to illustrate the story is a hand-written copy of John Pemberton’s original recipe, jotted down by a friend in a leather-bound recipe book of ointments and medicines, and passed down by friends and family for generations.

The long story of Coke’s secret formula begins with Pemberton, a veteran from Georgia who emerged from the Civil War with a morphine addiction. Hoping to cure his ailment, he dreamed up Pemberton’s French Wine Coca, a brew that included kola nut and coca wine. But in 1886, as Atlanta passed prohibition legislation, he reformulated the drink without alcohol, renamed it Coca-Cola, and began selling it in Georgia pharmacies.

Asa Candler, an early president of the Coca-Cola company who bought the formula in 1887, worried rivals would obtain the recipe so insisted no one ever write it down again. Staff removed all labels from ingredient containers and identified them by sight and smell only. Candler even went through the company mail so he could shred invoices that employees might attempt to sell to other drink makers.

If the radio program’s producers are right, Candler and other executives were too late: the book of remedies with the copy of the Coke recipe had already started its travels. This American Life tracked down the book to a widow in Griffin, Georgia, who says her husband was fishing buddies with the Atlanta Journal-Constitutionwriter. It’s now in a bank vault, too.

And while companies like Pepsi have deduced the general ingredients on their own, none have unlocked the “Merchandise 7X flavoring” that gives Coke its unique taste and bubbly burn. “The company has always said, and as far as I know it’s true, that at any given time only two people know how to mix the 7X flavoring ingredient,” Mark Pendergrast, historian and author of For God, Country and Coke told This American Life. “Those two people never travel on the same plane in case it crashes; it’s this carefully passed-on secret ritual and the formula is kept in a bank vault.”

Let others also know about it: